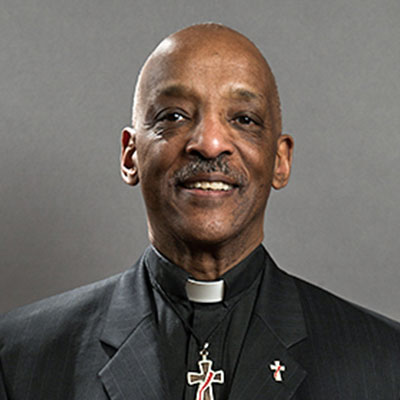 Deacon Clarence McDavid grew up in Denver, CO and attended Catholic schools from fourth grade through high school. He then attended the College of Great Falls in Great Falls, Montana (a small Catholic College), where he earned a Bachelor’s Degree in Sociology with a minor in Psychology. He also holds a Master’s degree in Public Administration from the University of Colorado, Colorado Springs. Currently the Human Resources Director for the Archdiocese of Denver, Deacon McDavid has worked in both the public and private sectors over the course of his professional career.

In 1987, Deacon Clarence was ordained by Archbishop Stafford for the Archdiocese of Denver, and has been assigned here at Cure D’Ars ever since. He served as the Parish Administrator for the parish during the absence of an assigned pastor. He has worked in non-liturgical assignments on the Deacon Personnel Board (three years as chair), served as a Deacon Region Coordinator, and as the chair of the Deacon Screening Committee. He is currently an approved Advocate who works under the auspices of the Metropolitan Tribunal on annulment cases.

Deacon Clarence is married to Wanda McDavid. They have three children and seven grandchildren.